by shellfaithfull on September 27, 2017 in Across The Border • 0 Comments

I woke early this morning. I seem to be waking at my usual Australian time of 5.00am regardless of the change in time zone and the previous day’s activities. It was a hot night in my room and I had trouble keeping the window open but I was fortunate enough to have a bench top fan. Only problem was it had a 3 hour timer on it, so I was forced to get up and re-set the timer throughout the night. First world problems…

I was ready well before breakfast so I went for a wander about the town in the cool morning air. There were a few cafes open with many pilgrims starting their day in them. I looked at some of them and wondered what their story was. I felt more like a pilgrim today now we’d gotten our first day on the trail out of the way. It was great to be back in my trusty boots and I contemplated the distance I had done in them in various parts of the world. They’ve sure taken me some places…

I headed back to the hotel and all of the team were already at breakfast. Another feast of cheese, ham and bread! I felt a familiar theme developing here…

Some of the team went back to their rooms to get their bags while I wandered out in the street again and received what was becoming my regular Facetime call with Lorna in the bath (and Renee). I really look forward to that first connection when I see her beaming little face pop up. Such a joy to be able to stay in touch when you’re across the other side of the world.

My daily dose of home.

The rest of the crew ambled out into the street and we did a little group stretch before setting off as the sun was rising. We walked down the hill and out of the town and straight up the side of a mountain! It was a busy walk out of town with many pilgrims starting off at the same time. It generally takes a little time before things settle down and we start to find the gaps and our own space.

Looking back up towards Portomarin as we begin our descent up the mountain.

All the pilgrims leaving town. 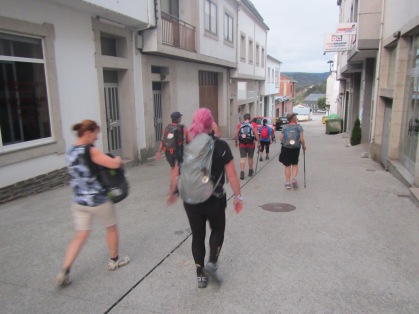 We walked through some beautiful fields and farms and a section of the national highway which wasn’t overly interesting. After about 7.5km we reached Gonzar, our first stop at Cafe Descanso del Peregrino.  It was very noisy and crowded with pilgrims buying coffee and food and a long line to the one toilet! I was fairly happy to get away from that one and back into the solitude of the trail.

The next 10km was mostly along the side of the highway again, occasionally winding through fields and little towns. There was another fairly steep hill to climb before settling into another 10km before our lunch stop. The view from the top was beautiful! 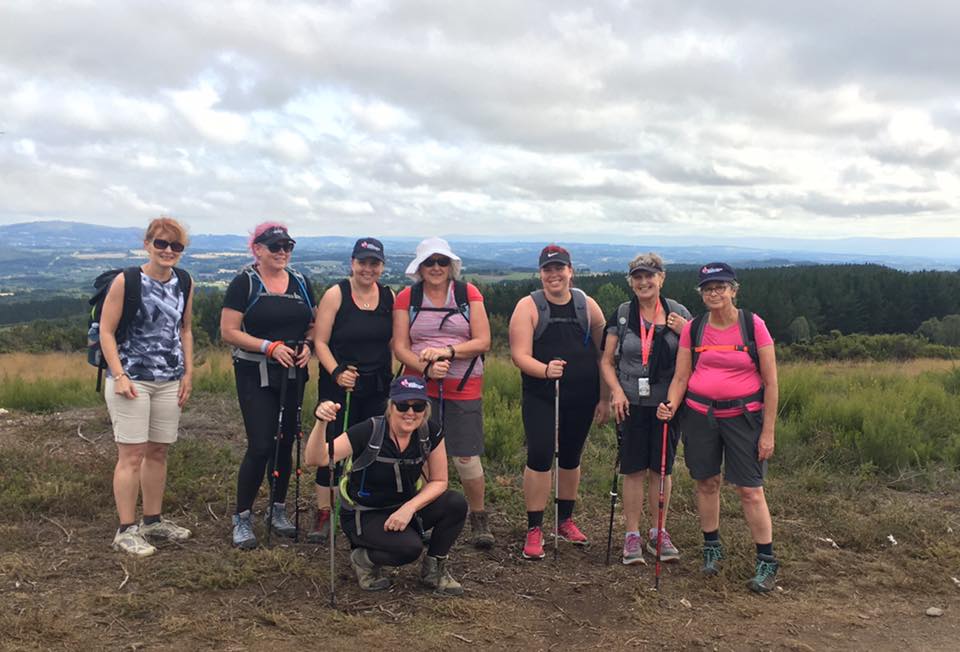 Love a good team shot on top of a mountain!

We stopped at a tiny church to have our passports stamped by a blind man. He was very friendly and a bit cheeky. I was falling in love with the passport stamping ritual. The thought of having a full passport at the end of the week was bringing out the primary school girl in me… I likened it to a project that would be marked by the teacher at the end and then be awarded a certificate. It was quite strange really.. or perhaps it was just me being the perfectionist I am. Either way, it was a lot of fun and the local characters we met at these stops made for wonderful memories.

The blind man in the church. 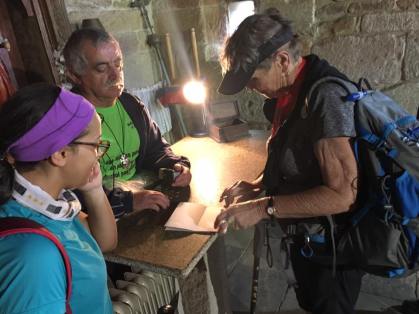 Getting our passports stamped. 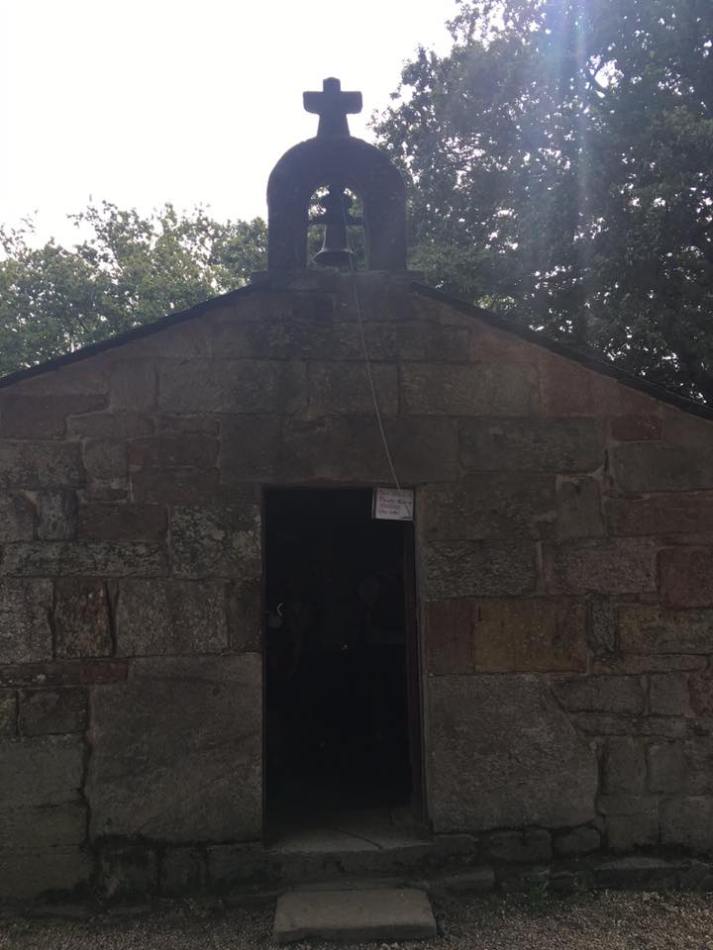 We finally reached our lunch stop, a gorgeous little places called Casa la Muz. On the road in we met up with our two Australian friends from Perth that we met on the first day. They were still travelling with a woman from Toronto, Canada who had decided to join them. It was a little awkward as some of us felt that there was something not quite right about the liaison… we were to discover the story some kilometres down the road. The food here was delicioso! I ordered a jamon (ham), lettuce, cheese and tomato roll, thinking it would be a nice light lunch. My goodness, the size of the meals in Spain are something to behold and this one was no exception! Almost a full sized baguette for one, but hey I ate it anyway.  When in Spain… 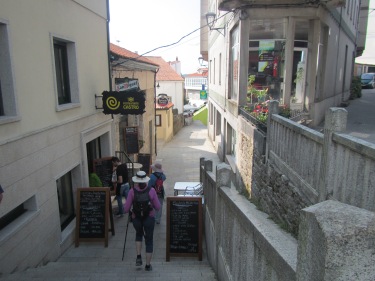 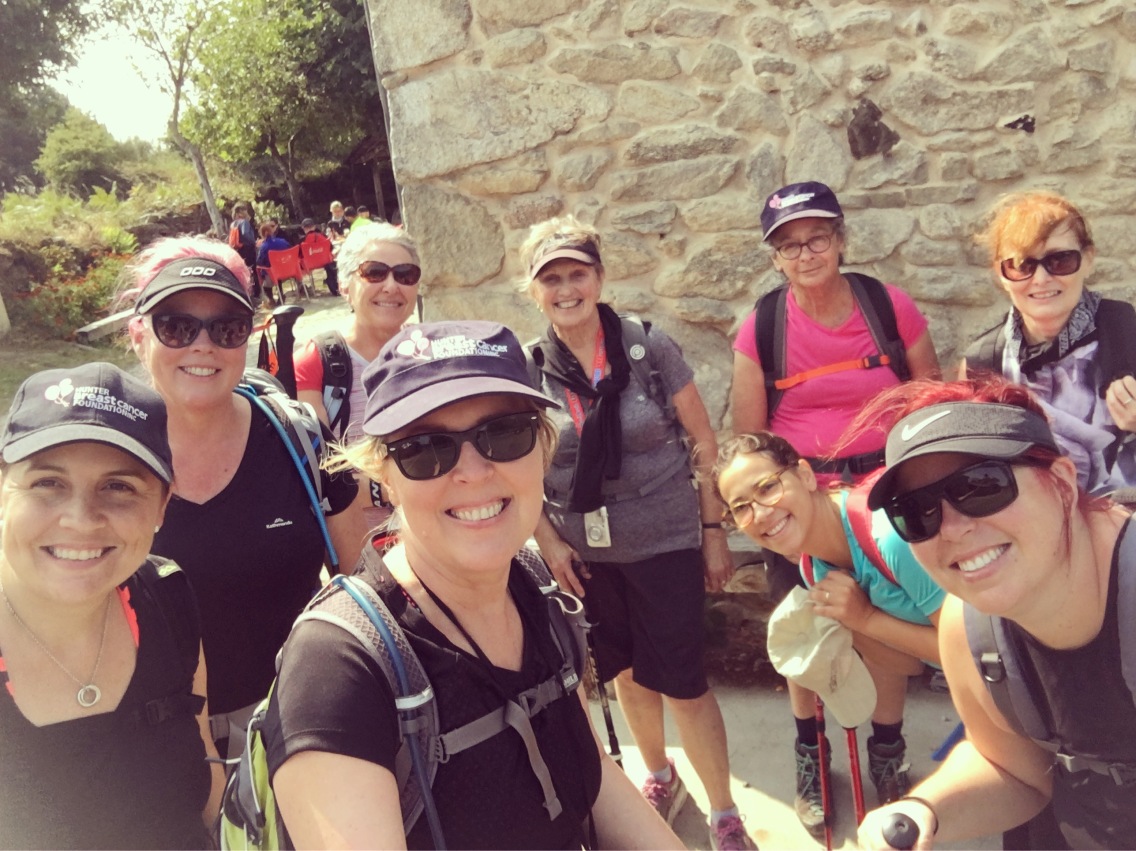 At this stage we were all starting to feel a little stiff and sore with at least another 10km to go. We certainly kept a cracking pace in the afternoon with the ongoing debate as to how many kms we were actually doing as opposed to the itinerary at the top of the discussion.

Jo has been tracking our steps and distance on her phone app and our head guide Giulia’s estimations were a couple of kms less on the first day. Her estimations for today were 24km, but we ended up doing 28.7km according to Jo’s app. It certainly felt like it so we were going with that!

We decided it was time for a silly photo.

Our feet were feeling a little violated by the hard surfaces we’re enduring, lots of pebbles and road and we were very pleased to finally reach our accommodation at Palas de Rei at about 5.00pm. As we came into town we met up with our Aussie friends again, minus their third party. We didn’t think much of it at the time, but noticed her absence all the same. That story is to be continued…

Keira was especially keen to find a shop as soon as we got top town, to buy some sandals… her boots had given her grief even before she left Newcastle and there wasn’t any way she was going to walk any further in them. After bringing along her runners as well she’d had a go at both but the time had come to try some sandals. Most of us were a little worried that she wouldn’t last the distance in her new purchase (“ugly sandals” as she called them). Time would tell… it was worth a shot.

Palas de Rei is a gorgeous little town and after a shower we sat down for a beverage out the front of our hotel and watched the world go by.

It’s that time of day…

Giulia arrived some time later and told us about a shop a few doors up that sold customised t-shirts. The shop was owned by a lovely man by the name of Ionut Prena. He is a Spanish paralympian (weighlifter) and he sells these colourful customised t-shirts. With the proceeds of these sales he supports various local community projects including purchasing prostheses for children with disabilities. He actually doesn’t have any legs himself but boy does he have a huge heart! He also has a stall along the Camino between Palas de Rei and Arzua. Our entire team got pink shirts printed to wear on our last day, with our hashtag #hbcfjourneyofsupport2017 and our names on the back. We got a selfie with him at his stall on the trail. 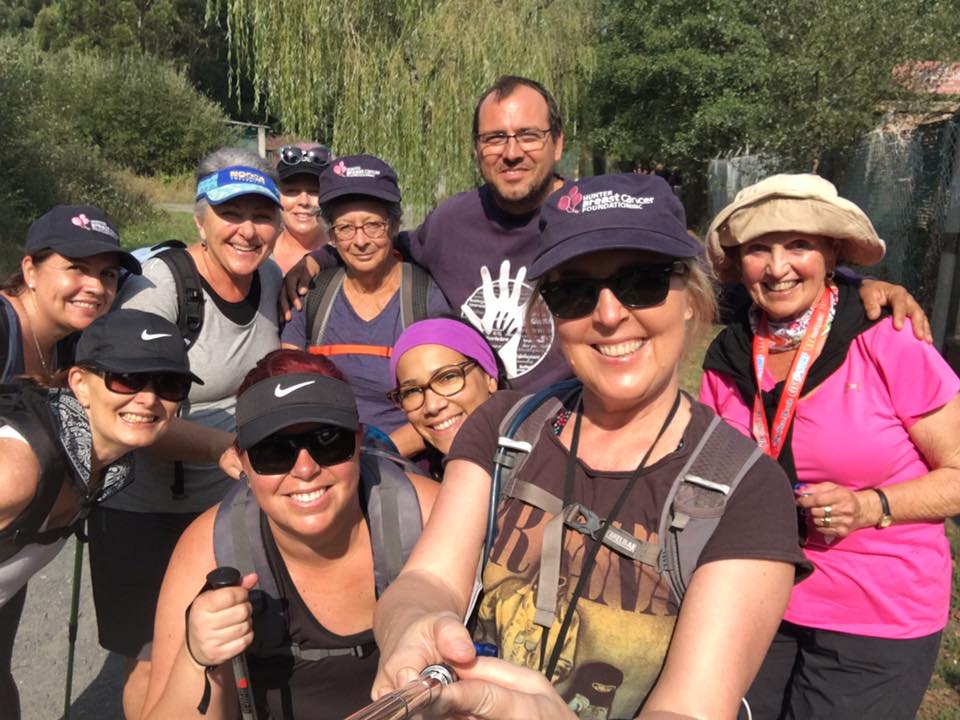 Selfie with the man! 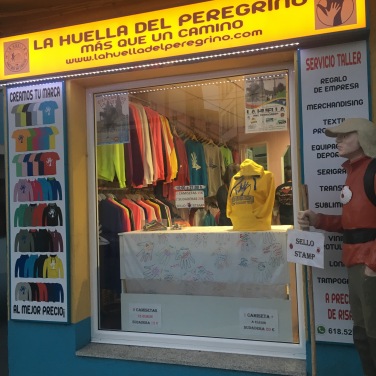 Ionut’s shop in the main street of Palas de Rei.

We left our mark.

Dinner in the hotel was a hilarious occasion as we recapped the day’s events. We were the noisy Aussie crowd in the restaurant… actually we were the only crowd! More Galician soup and salad with egg was on offer but some of us couldn’t go past the spaghetti bolognese. Not sure it was the best decision in the long run, given we weren’t in Italy but any carbs were most welcome!

Another early night was in order to be ready for our big 30km day tomorrow. This was going to be a tough one.