Writing about my grandfather has been on my mind for a few years. On a few different occasions I had thought about starting this blog, but I never quite reached the point where I felt it was something I needed to do… until now.

We lost this generous, kind soul from our family at 5.00am on the 23rd of March 2018, and I was privileged to have been there, in the dark, holding his hand as his 100 year old body took its final breath. Our family had gathered around him in his last few days and as we sat around his bed, we comforted him, we played music to him, recited the stories he had told us over the years and we laughed together as we remembered the cheeky character he always was.

Some of this blog has been taken from my father’s beautifully written eulogy for Pop. These are his words.

Walter Roy Richards had a tough childhood. Born in 1917 near the end of the first world war, in Port Arlington Victoria. The sixth of eleven children and as a male he was expected to help his father with fishing duties from the age of about 11 or when he was strong enough to drag a net through the bay, barefoot with his brother Joseph on freezing cold mornings. Of course, such was the frequency and duration of these duties, they often impinged on his school work and so he was regularly up before the Head Master for falling asleep in class.

His first pair of boots were given to him by a family friend who found them while working in flood relief, still in their box floating down the Barwon River. He was just 10 years old.

As a youngster, just getting a decent feed at a dinner table jam packed with 11 kids proved challenging. Dad often said you had to eat what was on your plate or go without. If they had bread, you were allowed butter or cream, (both produced by their solitary cow) but you couldn’t have both. Their father Christopher was a strict disciplinarian and suffered no fools so their childhood was all work and very little play.

The Richards’ house in Queenscliff 1936

Times were tough in Queenscliff, Victoria during the Great Depression but Walter was determined to become independent of his family and contribute to the family’s  limited finances. He told the story of how he became part of the Permanent Forces by sheer dogged persistence.

Dad often went to the Queenscliff pier to jig for squid to be used as bait by his father the next day. Walter’s generosity came to the fore at a young age when he met this old guy nearly every day trying to do the same but without success. Dad couldn’t help himself, he taught him how to rig his line properly and how to position himself in the right place with the right light and when to jig the jig etc.

Unbeknown to Dad, this old guy happened to be the Commanding Officer of the Fort at Queenscliff.  The CO was so impressed with Wal he convinced him to try out for selection at the next intake of recruits for the Permanent Forces.

Dad made a squad of 20 men selected from 200 because of his health and strong will, instilled in him by his father. He was just 18.

The Army took Dad to Darwin in 1937 through to 1941 and then on to Newcastle where he served in the Proof Range testing armaments before they were shipped overseas  to the end of the war.

It was this posting that created a chance meeting with our beautiful mother Beatrice at a dance in Manly where Dad first attended Artillery School before shipping to Newcastle. 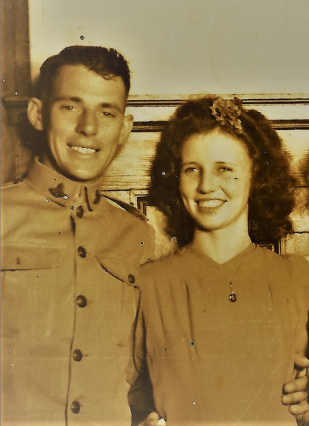 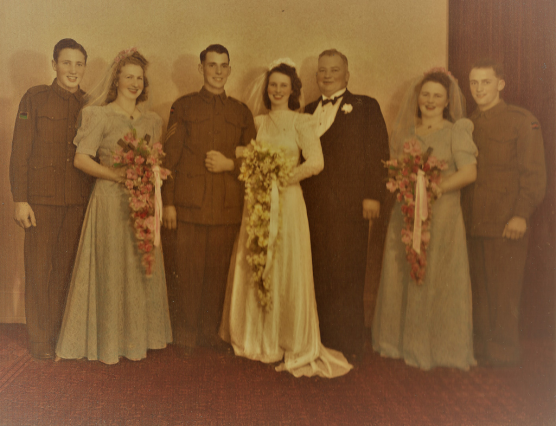 Dad was a hard worker, a Staff Sergeant in the Army during WW11, a Coxswain on the Works and Harbours Launch “Bass” in Port Philip, a baker with his brother Joe in Darwin through to a cook in the War Veterans Home in Collaroy. Later Mum and Dad ran a small Pet Shop in Dee Why.

Dad was a character to say the least about him. He often had us all in stitches with his stories from the early days in Queenscliff to the war time experiences in Darwin with his mates. When he got together with his brothers the stories were endless. 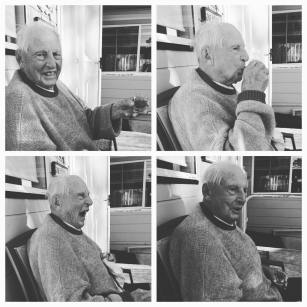 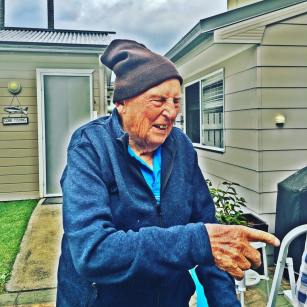 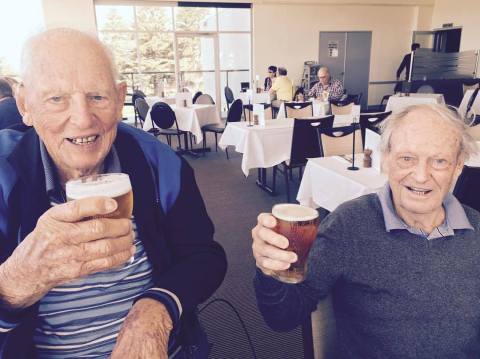 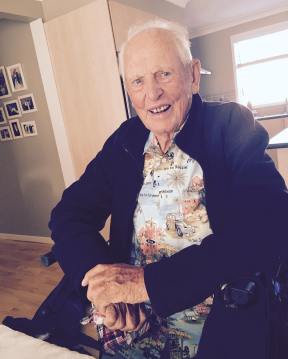 The stories will never die, many are preserved forever on social media. Faithfully recorded (no pun intended) by Michelle and myself over the years.

We will all miss our dear father, the source of our convictions and our inspiration.

So he turned 100 in December 2017 and we threw  him a party. People came from near and far to be with him. Wally was surrounded by his loving family as we celebrated his extraordinary life.

So precious was this moment, because for the first and last time, we had five generations in the one room when he met our little Lorna. 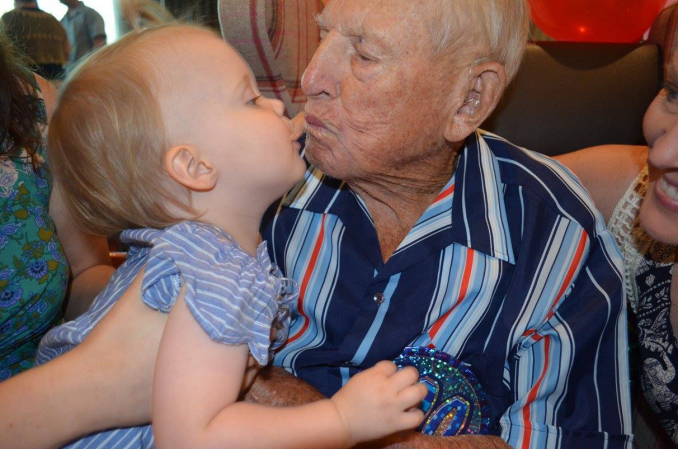 … and now I sit here, two days before ANZAC Day 2018, contemplating the first one without him on this planet in my lifetime.  The last couple of years I was privileged to have taken him in the ANZAC march on the Central Coast. He had an absolute ball, telling everyone he was 100 last year, when in fact he was only 99 at that stage, but we weren’t about to correct him. 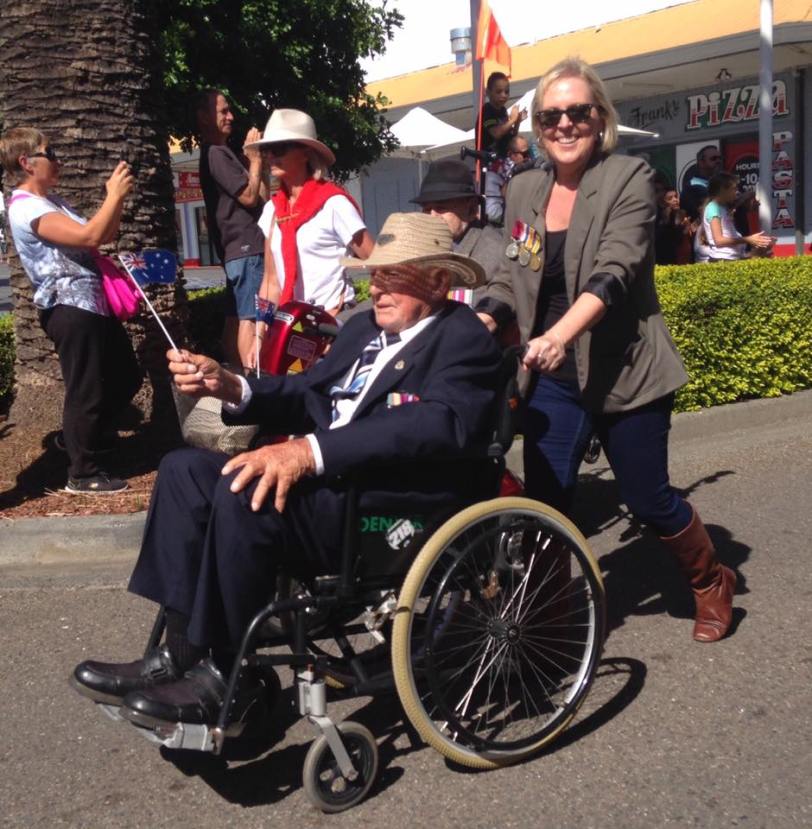 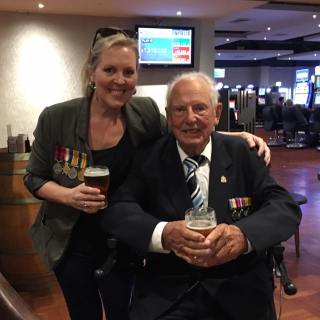 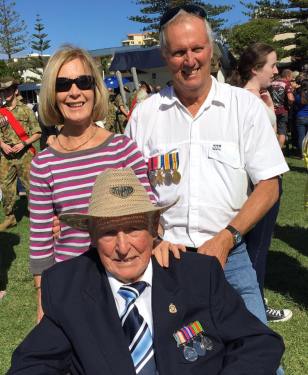 To see the joy on his face as the crowds waved to him while we walked at the front of the line. I’m so grateful to my family for allowing me to be the one to share that with him. A very proud moment for me. I’ll never forget it.

So this ANZAC Day, our family will be thinking of him and most will no doubt have a beer for him. I know I will…

Rest in peace Walter Roy Richards. We salute you.

← My Little Irish Adventure
I thought of you… →

One thought on “My Grandfather’s Life”