by shellfaithfull on November 8, 2015 in Across The Border • 1 Comment

It’s a 6.00am start at the hotel in Cusco. I’ve managed to pack my bag with the correct weight (well a tiny bit over..) and filled my day pack with the essentials such as water, snacks, camera, first aid kit, poncho and jacket. 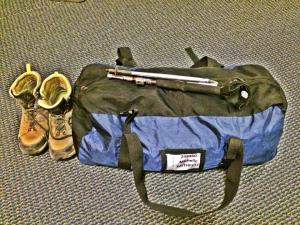 We were collected by our guide Paul Enriquez and as usual, we’re standing on the footpath of the one way street waiting to pile into the bus as quickly as possible, so as not to hold up the relentless traffic of Cusco!

We hop on with our packs and duffle bags and there are already a few other sleepy trekkers on board. It’s the first time we lay eyes on each other. Paul has told us that there are two Russians (Galina and Slava), two Indians (Swetha and Sundeep), two Americans (Linsday and Katie) and two Canadians (Nick and Cheri) plus us, the 3 Aussies that make up what would become Team Haku!

We head out through the Sacred Valley and pick up our last couple before we head on to Ollantaytambo for a pit stop and breakfast for those who hadn’t managed to down any food yet.

After a wander around the markets and grabbing a few snacks, we were off to Kilometre 82, our starting point for the trek and where we would finally meet our porters. The scenery along the way was beautiful. Crossing rivers and passing small farms as we travelled along the tiny dirt road until we came across another bus coming from the other direction. What began was what you might call a Mexican stand off.. well in this part of the world, I’d say it was a Peruvian stand off! The oncoming bus was fairly intent on getting past us, but failed to consider that we had nowhere to go.

After a few backwards and forwards manoeuvres, we eventually got past only to find another bus heading our way, along with trucks and locals all looking a little impatient. Our bus driver was exceptionally skilled at getting us through and we all cheered as we continued on our merry way. 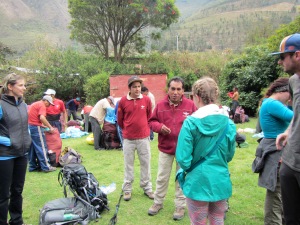 Meet and greet at Kilometre 82

We arrive at Kilometre 82 to find all of our porters waiting for us with their bags and packs. We unloaded our duffle bags and the porters weighed them and transferred them to their own packs. I was a little worried at this point that my name might have been called out, as I was a teeny bit over 5kg. I held my breath as they weighed, but my concerns were unnecessary. I passed!

As we waited, we introduced ourselves to the rest of the team and met our second guide Omar Salas. I noticed there were plenty of tiny insects about, they looked like midges but I think they were actually mosquitoes. Our first encounter with these little buggers and it wasn’t to be the last… Out came the repellant and we hoped for the best!

As the porters finished packing and made their way along the track, we picked up our packs and headed for the checkpoint to get our passports stamped before we set foot on the Inca Trail. We were all pretty excited. The time had come and we were actually really doing this! As we reached the checkpoint we waited in line while the porters were checked and we moved through as a group.

We stopped for a group photo at the beginning of the trail and then we were off! We begin at 2750 metres above sea level.

Over the bridge and up the mountain we go, a fairly steep incline at first and we are already breathing heavily. A weird experience when you’re reasonably fit. There’s no control over it, you just have to suck those breaths in and get on with it. Something we would all become very accustomed to over the next four days…

Plenty of locals on the Trail!

It was a steady few hours of gentle inclines and a few steep descents. There was lots of laughter and chatting as we got to know our fellow trekkers from all over the world. My first impressions were, that we had a great bunch of people on board. Turns out I was right…

Slow and steady, we begin.

After a few hours we reach the first archaeological complex of Llactapata at 2250 metres above sea level, so we’ve come down a little since we began. It is believed that a high-ranked Inca had ordered the construction of Llactapata and that the place must have had some connection with Machu Picchu (located further northwest). It could possibly have been a shrine. 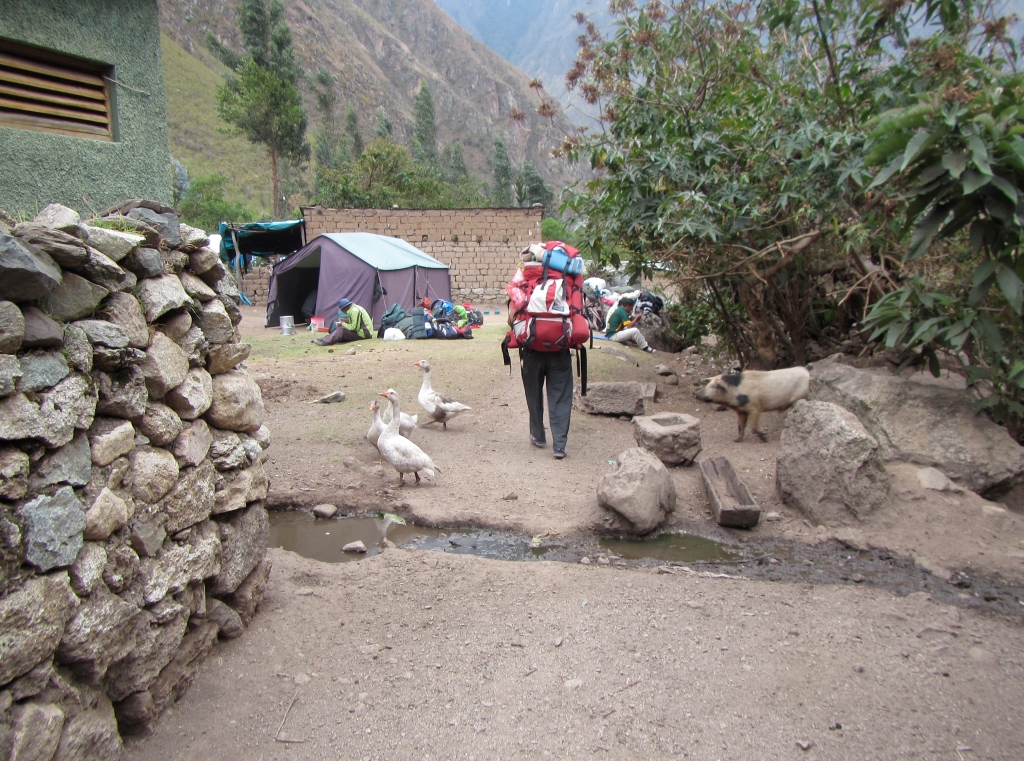 It’s not far from here that we stop for lunch. The porters are all standing in the camp waiting for us and clapping us in as we arrive (kinda reminds me of Kokoda!). It’s a local village with a few pigs, chooks, geese etc hanging around and smack bang in the middle of it, is our lunch tent!

We were given a lovely mushroom soup for starters, followed by chicken and vegetables. A far cry from the SPAM, tuna and 2 minute noodles on the Kokoda Track! This is livin’ Barry! We were all pretty hungry by this stage, so we got stuck into it with a lovely cup of coca tea.

After lunch we hiked for a little longer, bringing our total hiking hours to around 5 for the day with a total of 12 kilometres. We came into Wayllabamba in the early afternoon to a beautifully set up camp. The porters are clapping us in again and our tents already pitched in a neat little row facing the beautiful mountains. We’re currently at 2954 metres above sea level and we are all feeling fine. I’ve got a tiny headache but nothing to complain about. It’s been a wonderful day, getting to know our team, seeing some absolutely stunning scenery with plenty of breaks to get us acclimatised to the altitude. It’s the end of Day 1 and we’ve done pretty well. We’re all a little nervous about Day 2, but we’re not thinking about that just yet. It’s time to put on our woolly hats and relax for the evening. If only we had a beer…

Formal introductions with our porters.

One thought on “The Inca Trail, Peru: Day 1”