by shellfaithfull on November 26, 2013 in Across The Border • 0 Comments

So we get to have a sleep in today, 6.00am wake up call, but alas those darn roosters have other ideas. I’ve estimated it’s about 3.00am, considering that’s about the time I’ve been waking up every day…it just feels like it’s 3.00am. So I bow to my bladder’s command and make my usual early morning toilet trip….then come back to bed but I’m finding it hard to go back to sleep as my mind is in overdrive. So many experiences, on so many levels so far, it’s quite the exercise to put it all in perspective. Am I really laying here in the dark in some remote village in the highlands of Papua New Guinea, listening to roosters crow? How the hell did I get here? Hang on a minute, how the hell did I make it this far? Oh yeah, that’s right, I bloody trained for 12 months!

I decide to use the time wisely and do a few stretches in my tent, in the dark, amongst all of my belongings, with roosters crowing just to add to the ambience of it all. So if you can picture this, you’re probably laughing right now. I know I was…. I also have another brilliant idea. To write in my journal. I’m sitting there with my head torch on (red light of course so I don’t wake the neighbourhood) making notes about all of the things I lay there and think about in the dark each morning. I tend to forget some of these details at the end of the day when we’re sitting around the campfire. It’s not until I have some time to reflect, that the deeper thoughts come to mind. I want to hang onto these, because these are the thoughts I should take with me for the rest of my life. The important stuff.

Finally I hear some movement from the others and I decide to make a move outside. I wander out and chat to Pete, only to find he had been sitting outside in one of the huts at 3.00am doing his stretching also! He actually watched me walk past in the dark, and didn’t say a word. We’re turning into a bunch of crazies…

Breakfast of CHAMPIONS!! is on again, good old porridge and bananas!!! Sticks to the ribs that one.

As we prepare to leave to go and meet Mr N’Diki, one of the last remaining Fuzzy Wuzzy Angels, his son Joel gives us a talk on the tree house that is situated in our camp, explaining that only as little as 50 years ago, many of the warring tribes used to live in these houses with the head of the family standing guard with spears, protecting their families in the trees. I did manage to climb the tree house, but I can’t say I felt overly safe in it. Yet another example of the things I have become accustomed to.. bricks and mortar. Do we really need it? Another first world materialistic view?

We set off down to the village of Naduri and checked out the local elementary school, which has been funded by BackTrack Adventures. Unfortunately the children weren’t there, but it was an interesting tour all the same. Some great work being done by many trekking companies using the track, with regular funds being contributed in various ways in several villages all along the track.

School with an awesome view

Next stop….is the highlight of the trek for me! We finally get to meet our Fuzzy Wuzzy Angel – Mr Ovuru N’Diki! (I have noticed various ways people have spelled his surname, but I am sticking with this one as it is what seems to be the most common).

And there he is… sitting in his wheelchair in the little house made especially for his meetings with trekkers. I can’t believe we’re standing in front of him. He is gentle, quiet and unassuming. Reportedly over 105 years old, some say 110 but nobody can confirm this. His son Joel fixes and fiddles with the medals hanging off his jacket while he talks to us about his father’s life. He tells us the poem of the Fuzzy Wuzzy Angel, although he speaks so fast I can really only pick up every 3rd or 4th word! I watch Mr N’Diki as Joel speaks, he’s drifting in and out of sleep and occasionally he wakes up and says something to correct Joel. He looks my way and I detect a glimmer in his eye. I’m chuffed. Then the moment arrives when we are each able to go and shake his hand, one by one. There are photos being snapped galore as we each take our turn, all of us savouring this special moment. We are shaking hands with an absolute legend. We all want to hang onto this moment for as long as we can, but we know we have to move on. There is another mountain or twelve to be climbed.. 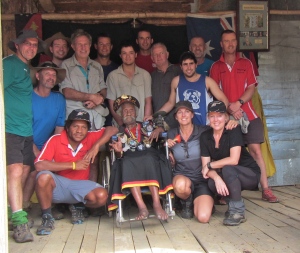 Here we were thinking we were in for an easy morning…It was to be a 2 hour walk to Efogi, our next camp for the night. Pffft.. what a snack!

The downhill section out of Naduri was exceptionally difficult with very slippery conditions. It’s that baby poo coloured clay we all came to hate. It was the worst thing under foot, especially going down. Just about everyone went for a stack in this section. Down, down, down we went, for about 2 hours in total. Our knees were feeling the pinch and it was hard work concentrating on every single step. So we reach the bottom of yet another killer of a mountain, only to find, of course we need to go up… again. Now on the map, this particular climb looked harmless enough, but it turned out to be the devil in disguise…we all thought it was one of the toughest climbs yet., probably because we were already totally spent after the first leg. But we survived, yet again.

We take a short rest at Efogi Camp 2. We’re greeted by the locals with a mini market of fruit and various bilums for sale. The kids are all laughing and smiling and ready for a game of something… so Joe pulls out the footy and kicks it around. I’m amazed at the sporting skills of all the kids in every village we pass through. They certainly know how to peg a tennis ball or kick a footy! 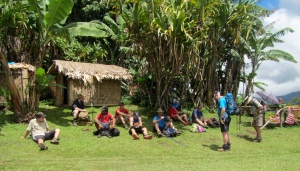 So there was only one more downhill leg to go until we reach Efogi Camp 1, and in true form, I decide to take an almighty stack with about 5 mins to go…It was a little beauty, not overly graceful, but a beauty all the same. I could feel myself going, and tried in vain to stop myself from falling flat on my face. In the end it was all rather awkward, and if it wasn’t for my lovely porter Max, I am sure I would have done some serious damage. I could feel him grab my backpack as I went, which kind of left me hanging in the air for what felt like an eternity. He couldn’t hold on like that forever, so I eventually fell sideways with my right knee twisting underneath me. It hurt, I won’t deny it. I nearly cried, but I didn’t. But it certainly shook me up…

I cannot emphasise how valuable these porters are. They have your back EVERY step of the way, catching every slip, taking your hand on every hill, over every creek and all the while carrying all your belongings plus their own! I likened this partnership to what the Aussie soldiers would have experienced with the Fuzzy Wuzzies during the  war. These people are the salt of the earth. No question.

Where did Gideon go?

We arrive (well… I hobble into) at Efogi Camp 1, another beautiful oasis with a running stream, and huts dotting the campsite. I reckon I could live here, with no phone and no internet. They’re onto something these beautiful PNG people. We set about organising our stuff for the night and changing for a swim before the afternoon deluge sets in. We thought we might have an opportunity to get some clothes dry, but our hopes were dashed again. It bucketed down, as we sat in the dinner hut, waiting for lunch to be served. I don’t need to tell  you what lunch was…We did however, come up with an ingenious concept of a Chinese laundry in the campfire hut. Somewhere to hang our soggy clothes over the fire, but they were never to smell the same again. To this day, at home, I can still smell that goddamn smoke in my skins!

and the rain came down.. 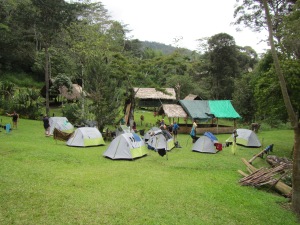 After lunch we decide to take the short walk into the village itself to visit the Kokoda War Museum. It’s a precarious trip for me with my dicky knee and that poo coloured clay again, but I wasn’t going to miss a thing on this trek. It was worth the effort.

The museum was full of artillery, guns, and even shoes with human bones in them! Fascinating stuff, but also sobering. To just pick up one of those rifles and feel the weight of it. I couldn’t help but think again about what the soldiers endured..

Yes there are human bones in those shoes..

It was a relatively early night for most of us. As we watched the amazing sunset, we gathered around the fire in the Chinese Laundry and talked about trivial matters. For one thing, we couldn’t remember the name of the band member from the Monkees, whose mum invented Tippex, and we didn’t have Google access to find out. We had many unrelated conversations like this over the 9 days…they ranged from talking about varieties of chicken salt, to how to use an analog watch as a compass… I guess you had to be there.. 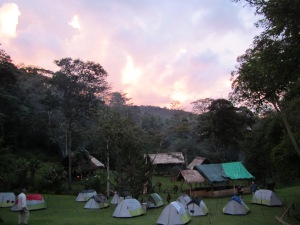 (Mr N’Diki sadly passed away on Friday 15 November in his home village of Naduri. We feel extra privileged to be one of the last groups to have met him.)