by shellfaithfull on November 7, 2013 in Across The Border • 0 Comments

It’s become routine now, to wake up at about 3.00am. I’m guessing it’s about that time as I don’t wear a watch and haven’t had my phone on since we left Port Moresby, but it feels like I’m laying there for about an hour until our usual 4.00am wake up call out by our trek leader.

I’m actually beginning to enjoy this little snippet of solitude in my tent each morning. I lay there and contemplate the the day before, the day ahead and pretty much solve the problems of the world while I listen to the gradual stirring of others in their tents as the village roosters decide it’s time to make a noise. In fact I am certain they have no bloody idea what time it is and they just crow for the sake of crowing…some days it’s quite comical and I often have a giggle to myself at their antics.

I also smile to myself as I hear the symphony of farts emanating from various tents around the campsite. They don’t let them rip…..just polite little escaping ones…Oh yep…the boys are awake.

So we rise and shine at 4.00am for another day in paradise.

We’re all getting better at packing up our belongings each day, although I’m not getting any better at keeping my tent tidy at night. Every night it looks the same…like a bomb has gone off, and that’s how I sleep. Amongst the carnage.

After our breakfast of champions, we put on our day packs and wait for the porters to chant the daily war cry. We are all joining in by now. It’s the part of the day I look forward to, everyone is smiling and pumped and ready for anther day by the time we get to the “Let’s go rock and roll!!!”

We ‘re greeted with a gentle but slippery slope this morning as we pass through the village. I’ve got Mark and Trace (the cheesiest mates you’re ever likely to meet) walking behind me and I hear the now familiar sound of slipping feet and turn around to check on them. I catch Trace executing the most graceful pirouette, a complete 360 degrees with no control at all, but he manages to stay upright throughout the entire move. Mark then explodes into a fit of giggles which ripples throughout the entire team for ages. It was catchy and it was very, very funny. Wish I got that one on film.

We come across a lovely bubbling creek before we head up a short, sharp and rather painful little hill covered with dirty, slippery roots (yes there was much discussion about this topic….more on that later). We reach the top for a quick rest before pressing on up to 1492m where we visit the Japanese defence site. We meet a local there waiting to greet us, he seems to be looking after this particular site. I’m guessing because it’s quite significant and it contains a lot of artillery.

We step on up the to the edge of the mountain and look down on Eora Creek camp. Reaching this particular destination was a big moment for me. I’d been reading about the battle at Eora Creek before I left Australia and it had quite an effect on me as it was the site of the largest battle in the Owen Stanley Ranges. It was also the first battle where the Aussies saw the Japanese run away, they dropped weapons and stumbled into the bush. Some of the dead Japanese were found wearing Australian wrist watches.

The Japanese had entrenched themselves at the site we were actually standing on, the high point above Eora Village.

From here, the Japanese were able to engage the Australians by mountain and machine guns at will. Brigadier John Lloyd (commanding the 16th Brigade – made up of 2/1, 2/2 and 2/3 Battalions), was under pressure to advance as General Blamey and MacArthur were not satisfied with the progress of the troops and decided on a frontal assault across the creek which resulted in a high number of casualties. At 2.30am on 23 October (note we were standing there almost to the day – 71 years later) the attempt was made, the men crossed the first bridge only to have the cloud clear from the moon and expose them in the increase of light. At dawn, the Australians were pinned down by the Japanese.

On the 24th and 25th an outflanking movement was attempted and to compound matters, Eora Creek flooded, washing away the log bridges. By the 27th, the Japanese were under continuous pressure and moved their position back. At first light on 28 October, two companies made a direct assault from the left and managed to succeed from the higher ground. Corporal Lester Pett knocked out 4 machine posts singlehandedly. Seventy nine Australians fell in the attack on Eora Creek.

We took a moment at the top of that hill, to think about the Aussies being forced to advance up the mountain. The Lost Battlefield was a little further up the hill but we were unable to go there as it was closed to the public.

We examined the artillery and the Japanese pits for a while, then set off down the mountain to Eora Creek Wartime Village.

We were met by a fairly impressive creek and a bridge made of sticks and vines and things. We all clambered across the bridge amongst the spectacular beauty. As I walked into the village I found it hard to imagine the suffering and loss that went down in what looks and feels today, like a peaceful tropical oasis. We spent some time here tucking into our snacks and taking the obligatory team photo before once again hitting the track.

We head on up the mountain another 500m to our highest point for the day (second highest point on the trek) at 1911m. It was a killer…2 hours of solid, steep climbing. Once again I was thankful I had trained.. I’m a steady, slow climber up the hills. Ascent isn’t my favourite, I much prefer the downhill run. I managed to score the nickname rabbit for my scampering down the slopes. “Run, rabbit run” I would hear Frank cry out as I’d gather speed and leave the back of the pack and catch the front runners! It’s just what I did…

After another rest on top of killer mountain, we walk for another hour and a half to Templeton’s Crossing 2 for lunch. The sun finally came out so we took the opportunity to drape our socks and towels and anything wet, over the grassy banks by the creek. The porters unpacked our tents to dry in the hot midday sun. It was humid, but the Chinese laundry session was successful.

As we left Templeton 1, we heard the thunder rumbling in the distance, and in preparation for rain, we covered our packs and set along the track. Little did we know that we may as well not have bothered with the covers..

OMG…what a deluge. The rain came down in buckets on the last leg of the day and we were soaked to the bone in minutes. We were walking in rivers rushing down the mountain, slipping and sliding in mud, our boots filled with water. There was no stopping it, so we just enjoyed it. In fact I even managed a few quick videos.

By the time we reached camp we were all freezing! We crossed the creek – or I should say RIVER – a final time, over a rather precarious bridge (where I very nearly lost my porter Max!) and headed on up to one of the huts while we took off our boots and waited for someone to bring some wood so we could light a fire!

Our lovely porters ran about in the rain, setting up our tents and covering them with ponchos for extra protection (some were more spoilt than others, but I won’t mention any names Renea Clements!). We were desperate to get out of our wet clothes, but we waited and shivered patiently. Some of the boys went out to help the porters, they were already wet.  Standing in the hut I felt a little guilty watching, but they were quick. They’ve done this many, many times before.

Once we had changed and settled by the fire, drying our boots we reflected on another amazing day and just when we thought it couldn’t get any better, dinner was served. Fried rice, country casserole and curried chook and sweet potato! Yummmo!

Not long after dinner, when the rain had stopped, Renea and Mark went off down the slippery hill to their tents to get something and the rest of us were sitting around the fire chatting. We heard this allmighty thud and we all ran out of the hut, thinking it was Renea that had gone over, only to find Mark dusting off his brand new white pants. The dusting didn’t really work as he had one mother of a mud stain firmly imprinted on his butt. Laughing session number 32 had commenced…

We had our usual six o clock news, followed by the nightly reading, this time a poem by foreign correspondent, Osmar White, read by Joe.

Quote of the day – Renea referring to the confectionary rings in her snack pack she had shared with others. After wearing them for a few hours someone must have asked her about them and all I heard was “We ate each others’ rings” 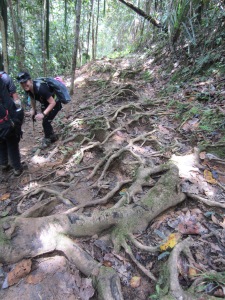 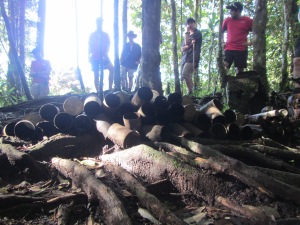 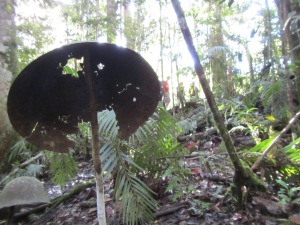 Japanese defence site at the top of Eora Creek 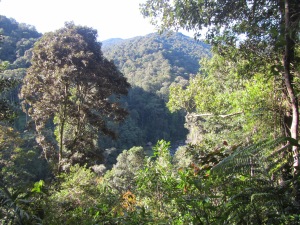 View down to the creek from the Japanese defence site 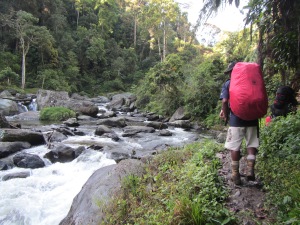 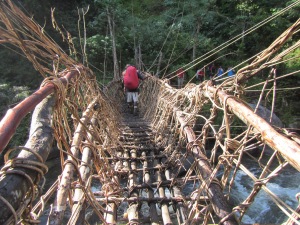 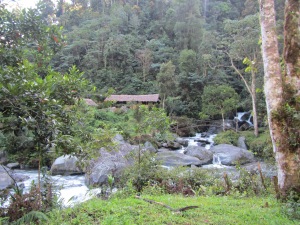 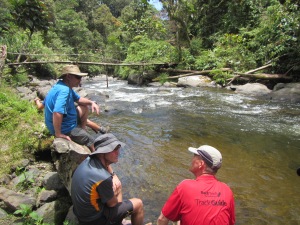 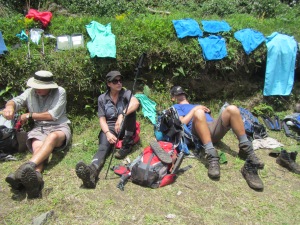 Chinese laundry No 2 at Templeton’s Crossing 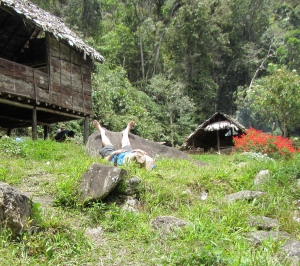 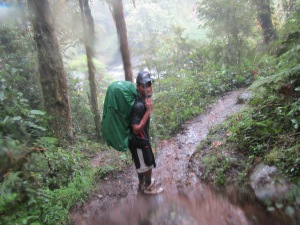 My porter, Max, waiting for me in the rain… 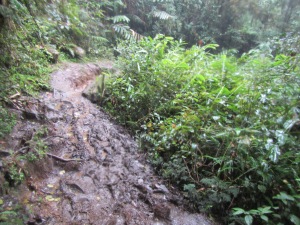 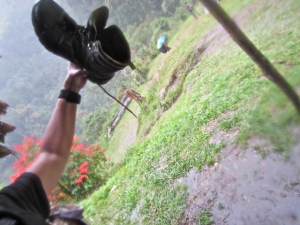 These boots weren’t made for swimming… 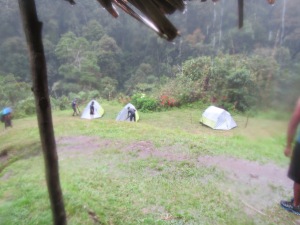 The boys putting up the tents in the rain 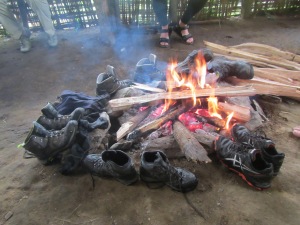 The smell of rubber wafted out from time to time…

And poor old Mark takes a dive in his brand new duds!